What would it take for you to give up your car? Better public transport? A really good bike or car-sharing scheme? Being able to summon a driverless car to pick you up from your door and take you wherever you want? Or how about all these things and more, accessed via a single smartphone app that would allow you to plan any number of journeys in your area, using any combination of methods, all for a flat monthly fee?

This is mobility-as-a-service or MaaS, coming soon to a city, town or even village near you. MaaS is the logical, some say inevitable, conclusion as the millennial-led “sharing economy” converges with innovations in the automotive sector, cloud data processing and mobile communications. It’s often overshadowed by autonomous vehicles (AVs), but it’s a far more radical concept that could consign vehicle ownership to the past, thus massively reducing the number of vehicles on the road. There are therefore profound implications for a built environment that has been overwhelmingly designed around the car, and the need for parking spaces, on-street or otherwise.

I wrote about the space implications of MaaS for the February 2019 issue of Modus, the membership magazine of the Royal Institution of Chartered Surveyors.

They may be as vast as an Amazon distribution centre, as energy-hungry as a steelworks, and as critical as a power station or major hospital. Yet many of us will never have seen a data centre – or never noticed one. And that’s exactly how their owners want it. That’s because data centres are the internet. They are “the cloud”. They are the huge, humming sheds through which every email, Google search, online transaction, Netflix movie and Donald Trump tweet must pass as it circles the earth. Just a few minutes of downtime could be disastrous for the companies, governments and financial markets that rely on them, so data centres are designed to be constantly operational, and protected from every conceivable threat, natural or manmade. Anonymity is the first step in a rigorous high-security philosophy that leaves nothing to chance. In this feature for Modus, the magazine of the Royal Institution of Chartered Surveyors, I spoke to the property professionals working in this specialised, sensitive market.

What this fortress approach can’t ensure is the cyber-security of the data within – arguably a much greater risk, as illustrated by the unprecedented cyber-attack last October that disrupted services across Europe and the US. After all, if you had the choice of mounting a Mission Impossible-style break-in, or hacking from the comfort of your armchair, which would you choose? 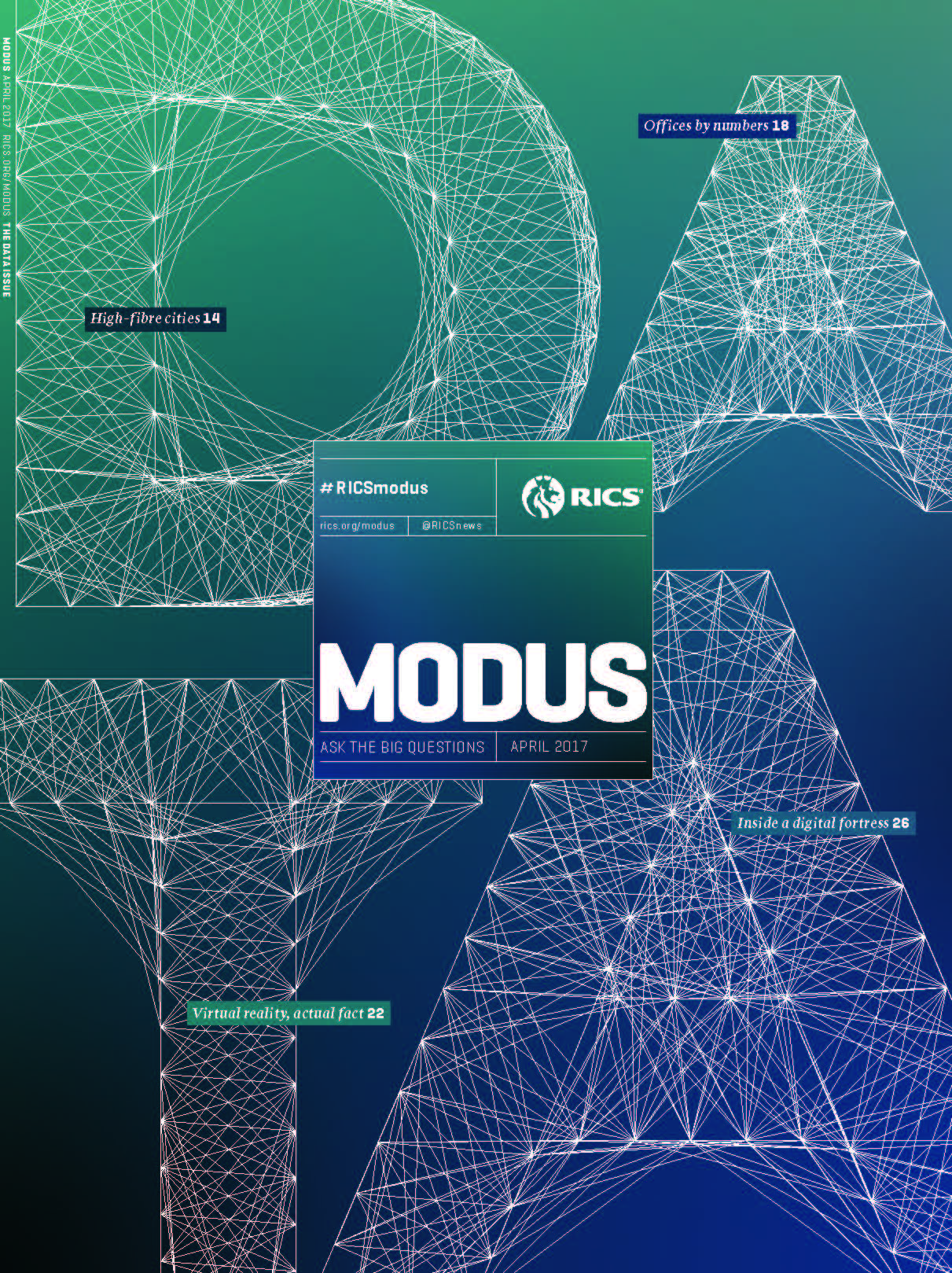 Flooding will become the new normal during the 21st century, as sea levels rise and rainfall becomes more intense due to global warming, and cities sprawl along coasts and rivers.

Half a billion people are affected every year, and this could quadruple by 2050, according to the EU’s Global Flood Observatory. Reinsurance broker Aon Benfield has calculated that flooding was responsible for $27bn of economic losses in 2015, often in areas that never used to flood. That was a good year – the annual average loss over the last decade has been $48bn.

In this brilliantly illustrated cover feature for Modus, the magazine of the Royal Institution of Chartered Surveyors, I looked at how the economics of property will have to adapt to a much wetter world. By 2070, Kolkata and Mumbai will be the two cities whose populations will be most at risk, while Miami, Guangzhou, New York and Kolkata will have the most to lose in terms of assets.

Spending on flood protection is often targeted at the highest value land or assets, while the poorer the community, the less able it will be to recover from a disaster. One contributor warned of the creation of “flood ghettos”: “It’s not just the immediate flood area, it affects the surrounding areas, and the wider community drifts down the economic scale. It becomes a self-fulfilling prophecy of less investment and fewer opportunities.” Meanwhile, another flood surveyor is going back to college, to do a master’s degree in a rather different field: how adults learn. “Getting people to understand flood risk means changing their perceptions and logic,” he explains. “I’m intrigued by why people make choices that are not in their best interest.”

At the first-ever UN “Buildings Day”, held at the Paris climate talks in December, there was unprecedented scrutiny of the carbon dioxide emissions associated with property and construction, and the sector’s role in averting catastrophic climate change. By 2050, emissions from the built environment must be reduced by an estimated 84 gigatonnes – the equivalent of taking 22,000 coal-fired power stations offline – if global warming is to be limited to less than 2°C.

That will take a radical rethink of the way we build and refurbish, but also of how properties are funded, valued, procured and managed: the World Green Building Council is calling for nothing short of a “global market transformation”. In this cover feature for Modus, the magazine of the Royal Institution of Chartered Surveyors, I investigated what that’s going to look like.

This is the property sector’s “tobacco moment”, one expert told me – the equivalent of the government reports that made an incontrovertible link between smoking and ill-health in the early 1960s: “The fundamental difference between the Kyoto Protocol [in 1997] and the Paris Agreement is that today no one can say they didn’t know there was risk.”

Even if – a very big if – global warming is held to the 1.5°C limit set by nearly 200 world leaders at the UN climate talks in Paris, this will represent a radical change in the global climate. The other big news from the Paris conference was an unprecedented emphasis on adapting to the change that is already happening, and which will continue for centuries to come, no matter what. Humankind faces an uncertain future in which extreme weather events are more frequent and more intense, and there is an escalating threat from storms, hail, flooding, droughts, tropical cyclones and landslides.

The Paris talks stopped short of setting targets or funding mechanisms, but the World Bank estimates that to adapt to a 2°C rise we would have to spend US$70-100bn each year between 2010 and 2050. The cost of not doing anything is pretty high too: over the last decade, annual damages to global real estate and infrastructure from severe weather events have tripled to US$150bn, reaching 8% of GDP in the worst hit regions, not including indirect losses to sectors such as tourism.

In this article for the RICS magazine, Modus, I investigated the far-reaching implications for property, from protecting individual homeowners against heatwaves and flooding, to future-proofing real-estate funds worth billions of dollars.

And for much, much more detail on climate change adaptation, there’s this book I co-wrote for RIBA Publishing.

Eight years after the global crash, investors are flocking back to property, the market is more diverse than ever before and there’s talk of overheating. A significant proportion of this renewed investment is the pension savings of ordinary people. So how confident can we be that it won’t happen again? Banks, insurers and pension funds must all meet tougher regulatory requirements imposed since the crash, but property remains less stringently regulated than other asset classes, less transparent, and its risk management procedures are less well developed. As the current market cycle wears on, investors will inevitably be drawn into taking riskier positions to secure improved returns – positions that could leave them dangerously exposed when the next crash comes. In this cover feature for Modus, I interviewed Martin Brühl of German fund manager Union Investment Real Estate, currently president of the Royal Institution of Chartered Surveyors, about his plans to set a global standard for risk management. I also spoke to RICS members about the challenges of spotting genuinely uncorrelated assets, identifying the real source of funds in a completely international market, and maintaining constant vigilance over a global portfolio.

Bad news for property snoopers: the UK’s most desirable homes are disappearing from estate agents windows, adverts and online searches. They don’t have For Sale signs, let alone glossy brochures or online walkthroughs, and you certainly won’t find them at auction. Around the world, an increasing proportion of deals are taking place off-market, in private or “whisper” sales. Instead of publicly marketing a property, agents in this most exclusive of sectors use their contacts to discreetly match buyers and sellers. Only a handful of people know that a deal is taking place, and the rest of the market will only hear about it after the deal is closed, if at all. I spoke to agents in London, Dubai and Melbourne to find out the tricks of the trade in this cover feature for Modus, the magazine of the Royal Institution of Chartered Surveyors.

The “fluid” themed issue of Modus was too good an opportunity to pass up: I pitched a feature about surveyors working in the world of wine. Happily they went for it, so I went to meet a property-developer-turned-château-negociant in the Bordeaux vineyards, who talked me through the 50 questions every prospective buyer should ask, and why they should forget about making any money. I spoke to an Australian agrarian about the toll that climate change is already taking on the Riverland’s parched vines and the financial woes of its major exporters. And, closer to home, I interviewed a fine-wine auctioneer in Cambridge about snaffling a bargain as the colleges turn out their cellars – and how to avoid a very expensive disappointment.

In good times or bad, wherever there is a building site, there is almost certain to be an argument about payment. Very low margins, long payment chains and “risk dumping” on subcontractors are common causes, but the complexity inherent in even the simplest building projects can lead to conflict. So perhaps it’s no surprise to hear of the rise of the “mega-dispute” where the sum contested is in excess of US$1bn– the natural consequence of the rise of the global mega-project, with firms from many countries working together to deliver massive infrastructure schemes. Whether conflicts are resolved swiftly or escalate into protracted court battles is down to specialists in dispute resolution, a dynamic and evolving field – and probably the most stable job in construction. In this article for Modus, the magazine of the RICS, I investigated why construction remains such a contentious industry and whether alternative approaches to dispute resolution could help.