Frustration drives some people to anger, some to despair, and some to write manifestos. It is into this last bracket that the British-Israeli architect, researcher, writer, speaker and idealist Itai Palti falls. The Conscious Cities Manifesto he co-authored with neuroscience professor Moshe Bar in 2015 was born of frustration, he says – though he usually prefers to put a more optimistic spin on it.

“I think the manifesto came out of this realization that we have so much more potential to put humans at the centre of the design process, and that it’s not being actualized. As a profession, architecture can have a lot of positive social impact but in practice there’s sometimes a laziness and an arrogance about it. I guess I can say that because I’m speaking from within.”

For all Palti’s readiness to criticize his peers, his ideas seem to have struck a chord. Over the last four years, he has rallied many of them to his cause of science-informed, human-centred design, alongside a diverse group of scientists, researchers and technologists. Palti was not the first to spot the synergies between neuroscience and architecture – San Diego’s Academy of Neuroscience for Architecture (ANFA) was founded in 2003 – but in marrying it to the opportunities of smart cities, he’s tapped into the zeitgeist. The Conscious Cities movement resonates with an array of current concerns, from wellbeing and mental health to techno-optimism and our darker fears about the unseen agendas we are hardcoding into an AI-driven world …

Read the rest of my interview with Itai Palti in issue 05 of The Possible.

In February, I travelled to Sweden to interview Johan Edstav, a Green party councillor in Uppsala who is leading a nationwide programme to build sustainable new towns. Sweden is one of Europe’s fastest growing economies, but it’s seriously constrained by a lack of affordable housing: in 2017, 255 out of 290 municipalities reported a shortage and the National Board of Housing, Building and Planning says that it needs to build approximately 710,000 homes by 2025. Like many other countries, it is struggling to balance city prosperity with affordability, help an ageing population to downsize, and decarbonize its economy. What sets Sweden apart is that this small country of barely 10 million has welcomed more refugees per capita than any other in Europe. In 2015, at the peak of the European migrant crisis, more than 160,000 people arrived seeking asylum. Sweden’s immigration policy is justifiably a source of national pride, but it has also raised questions about how so many newcomers can be integrated – or even housed.

So the challenge for the government, and Edstav as its representative, is not only to increase a paltry rate of housebuilding, but to plan new developments to bring people together in more integrated, better functioning communities. The Nordic countries already lead the world in environmental sustainability; now Sweden is seeking to isolate the DNA of the more complex and much less explored social dimension. I asked him how in this piece for The Possible, the thought leadership magazine that my company Wordmule produces for WSP.

We’ve just published the second issue of The Possible, the thought leadership magazine that my company, Wordmule, produces for global engineering firm WSP.

The Possible is about the future of buildings and cities and the ideas and innovations that can help them function better. In this issue we explore the limits on city density, the future of education, next-generation construction materials and whether we’ll ever be able to design a totally recyclable building. Chicago architect Gordon Gill, designer of the 1km-tall Kingdom Tower, talks about his responsibilities and regrets, and psychologist Naomi Shragai investigates what’s really happening when project teams collaborate. In our Connected Thinking section, contributors contemplate how drones will shape development in Africa, the seismic threat to Asia’s megacities, hospital design in a post-antibiotic world, how architects can ensure the wellbeing of site workers thousands of miles away, and why engineers should read more philosophy. It was designed by Supermassive and the cover illustration is by Noma Bar.

Professor Heinz Wolff works in a building that bears his name, surrounded by a lifetime of his own inventions – machines for Antarctic explorers, astronauts, soldiers, divers, people with disabilities, people with arthritis. That’s where I went to meet him in August, to find out about his latest project: not a machine, but an entirely new economic system designed to solve the problem of how cash-strapped Western societies can afford to care for a much larger elderly population. Now aged 88, the father of bioengineering still comes to Brunel University in west London five days a week to continue his pioneering work. But for the first time in his long career, he doesn’t think technology can provide the answer – a shift in thinking that he has compared to a religious conversion. “I came to the conclusion that if you’re having to care for a large number of elderly people who were not necessarily in total control of their cognition, then technology wasn’t going to be an awful lot of use. What you wanted was humanity.”

You can read my interview in The Possible, a thought-leadership magazine that my company Wordmule produced for WSP Parsons Brinckerhoff. Brilliant photos by Nicola Lyn Evans. 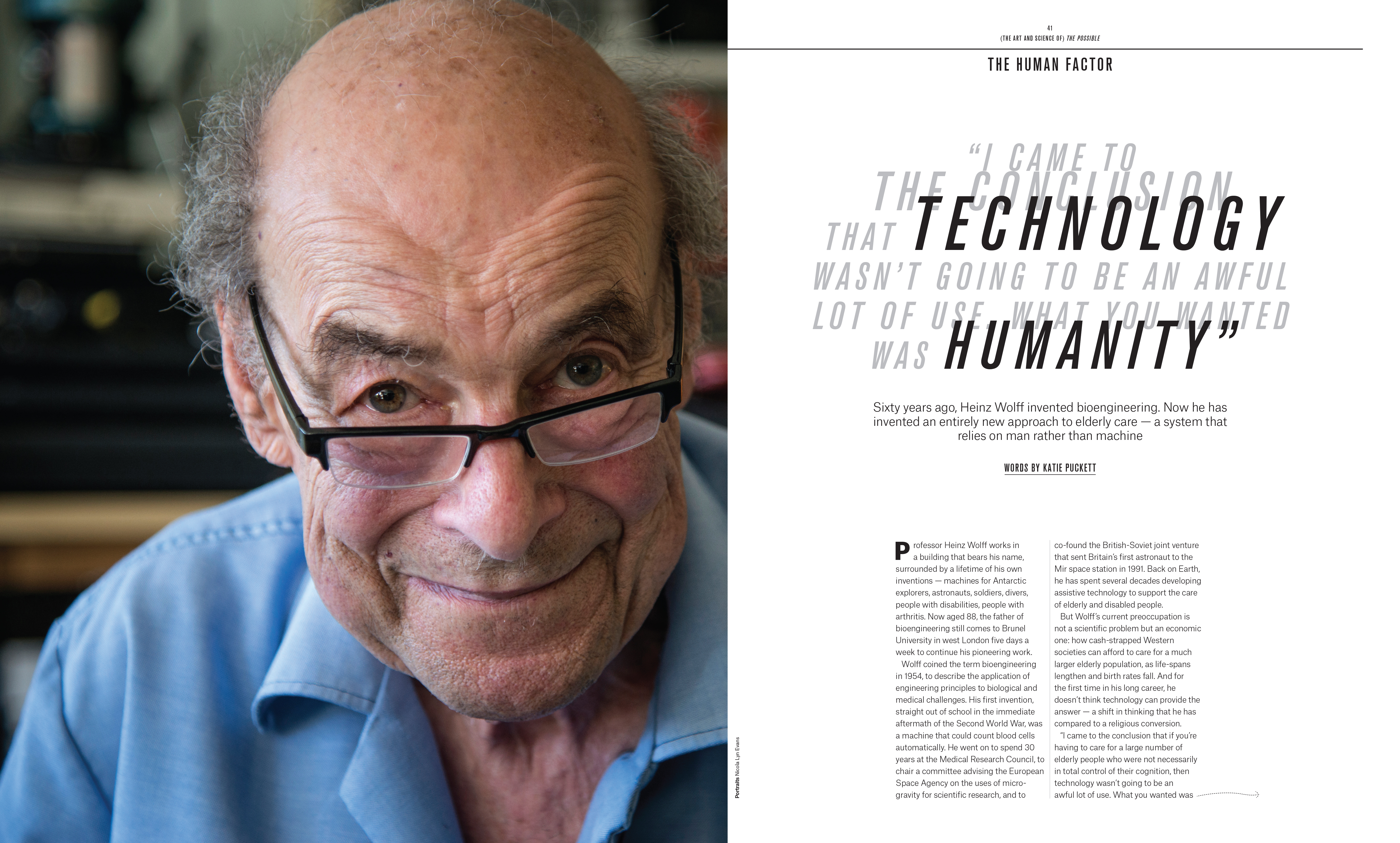 The “fluid” themed issue of Modus was too good an opportunity to pass up: I pitched a feature about surveyors working in the world of wine. Happily they went for it, so I went to meet a property-developer-turned-château-negociant in the Bordeaux vineyards, who talked me through the 50 questions every prospective buyer should ask, and why they should forget about making any money. I spoke to an Australian agrarian about the toll that climate change is already taking on the Riverland’s parched vines and the financial woes of its major exporters. And, closer to home, I interviewed a fine-wine auctioneer in Cambridge about snaffling a bargain as the colleges turn out their cellars – and how to avoid a very expensive disappointment.

The Midlands is renowned for its metal exports in many forms. What is less well known is that it’s the UK’s medical technology heartland, which means it produces quite a lot of hospital equipment and orthopaedic devices too. Medtech is an £18bn subsector of the UK’s life sciences industry, and together, the West and East Midlands are home to 30% of companies. In this piece for Estates Gazette, I interviewed Sir Albert Bore, leader of Birmingham city council, about his mission to raise the region’s medtech profile and the £800m property portfolio he’s identified to do it.

Last time Britain faced a housing crisis on this scale, it was local authorities that built our way out of it. The days when council building departments threw up gargantuan estates may be long gone, but there has been a quiet renaissance over the last three years as they deliver a small but growing proportion of new homes. Whether this is a scalable part of a long-term solution or just a blip in the continuing decline of council stock will depend on the policies of the new government – and it’s already clear that it’s not going to be easy. I interviewed a man who’s really hoping it’s the former: Eamon McGoldrick, managing director of the National Federation of ALMOs – the arm’s length management organisations that are responsible for most of this housebuilding. The article appeared in Inside Housing magazine, in a supplement which I also edited.

Picture a church. If you’re thinking of steeples and stained glass, you’re behind the times. Today places of worship are just as likely to look like cinemas, bingo halls, state-of-the-art conference centres or even industrial sheds. In this special report for Estates Gazette, I investigated how changing patterns of worship are altering the property landscape, as Britain’s older religions shed buildings that are increasingly surplus to requirements while newer ones struggle to find venues large enough to house their booming congregations. As well as a fascinating area for social historians and psychogeographers, religious property is increasingly big business. I spoke to property professionals involved in a vast range of deals, from convents and cathedrals to Methodist halls, mosques and megachurches, as well as the man responsible for London’s 36 (but probably falling) Quaker meeting houses and the head of the London Kabbalah centre, where a major extension is on the cards.

And for a different take on religious property, I also interviewed the Church of England’s Church Commissioners about how they manage an investment fund that is on very much the opposite trajectory to its congregation numbers, growing almost 16% during 2013.

It looks like the construction industry is finally out of recession – and facing a whole set of not-so-new issues. I interviewed Tony Giddings of developer Argent for Building about his £1bn pipeline at King’s Cross and elsewhere, and whether he’s concerned about rising costs and finding firms to build it all in a suddenly booming market.

Scarlett O’Hara’s dad knew what he was about. When he told his sceptical daughter that land was the only thing worth having because it’s the only thing that lasts, it took her more than three hours, a civil war and several husbands to come round to his way of thinking. But were he investing in the UK today, O’Hara senior would have no doubt felt vindicated. Land has weathered the recession better than anything else, not only holding its value but increasing it almost three-fold over the last ten years, as investors of every kind have piled into the market. In this special report for Estates Gazette, I investigated the extraordinary success of rural land, and what could check its progress, from the abolition of inheritance tax relief to Scottish independence.

Also included: an interview with James Townshend, CEO of Velcourt, one of Britain’s biggest farming businesses, who said that advances in biotechnology should increase productivity by 25% within the next ten years.